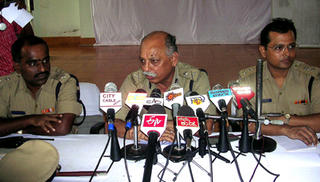 
Three people suspected to have links with naxalite groups in Andhra Pradesh have been arrested here last night, police said today.
Talking to reporters here today, IGP (Western Range) Suresh Babu said the arrested people were identified as Venkatreddy from Kodadi near Nalgonda in Andhra Pradesh, Syed from Malur in Kolar district and Madhusudhan from Byrapura in Sakhleshpur near Hassan.

The trio had been moving in the city in a van last night. As part of routine checking, the police had stopped their vehicle and on suspicion arrested them. While Rs three lakh cash and a pistol was seized from Venkatreddy, Rs one lakh cash and a revolver was recovered from Syed.

During interrogation the trio revealed that they had been proceeding to Kerala to purchase some weapons and ammunition.


It was also found that Venkatreddy had been earlier arrested by the Andhra police for supplying seven weapons to naxalite outfit Janasakthi. Of them, the police could recover only three weapons.

The arrested people were produced before the court today for seeking police custody. 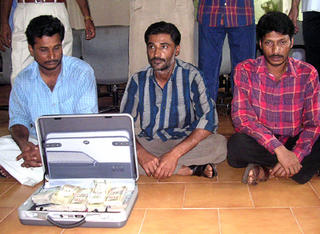 Three Persons Arrested on Charges of Supplying Arms to Naxalites

Mangalore, Oct 14: In a major breakthrough, the anti-rowdy cell of the district police have arrested a native of Kodad in Nalgund district of Andhra Pradesh and two of his collaborators on charges of supplying arms to Naxalites in Andhra Pradesh on Thursday October 13.

The details of arrests and seizure were provided to the media by western range inspector general of police K P Suresh Babu at a specially-convened press conference in his office on Friday morning. SP B Dayanand and Addl SP Lokesh Kumar were present at the meet. 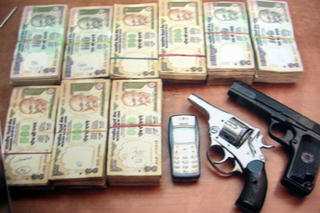 On Thursday P A Hegde, PSI of anti-rowdy cell and his team were on their usual patrol in the city when they got a tip-off that 3 persons were loitering around suspiciously in the old service bus stand at Hampankatta in a Tata Sumo vehicle (KA 04 N 596) of Bangalore registration. Immediately the police rushed to the spot and traced the vehicle and arrested the suspected. 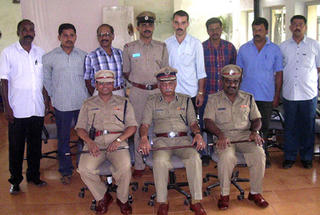 Cash and arms seized from the accused

Upon interrogation, they were identified as B Venkat Reddy (34), a resident of Kodad in Nalagund district of Andhra Pradesh, Mohammad Syed (36) of Malur in Kolar district and Madhusudan (38), a resident of Byrapur in Hassan district.

The police also found an illegally possessed foreign made pistol costing around Rs 2 lac and Rs 3 lac cash with Venkat Reddy. Mohammad Syed too owned a foreign-made revolver costing around Rs 1 lac, without a licence. Madhusudhan had Rs 70,000 in cash with them, which too was seized. Since they were not able to give proper and adequate details about their illegal holdings, police took them into custody and seized their vehicle.


The police team that took part in the operation

The details elicited during the subsequent enquiry were terrifying and startling. The prime accused Venkat Reddy possesses M Sc, B Ed, M Phil degrees and owns a college named 'Maharshi College' at Kodad. He is also a professor in the same college. But for the last 4 years he has been supplying arms to the CPI -ML Janashakti, a Naxalite organization after purchasing them from Karnataka and Kerala with the help of Madhusudhan and Mohammad Syed. He also revealed that the present Rs 3 lac that he possessed was brought to purchase arms and he was on his way to Palakkad in Kerala to procure them.

He also revealed to the police that he also has a case against him in the Kodad rural police station of Nalagund for possessing a gun illegally.

The second accused Syed is a mechanic in one of the garages at Malur in Kolar and has been running a taxi on hire. So whenever Venkat Reddy used came to Bangalore, he used to accompany Venkat in his vehicle to purchase arms from Karnataka, Kerala and even Andhra Pradesh. He also revealed that he had already purchased a rifle from Bangalore and had sold it to Venkat Reddy for Rs 1 lac.

The third accused Madhusudhan is the owner of 'Varsha Gun Mart', a gun shop at Byrapur in Hassan and he has been in touch with Venkat Reddy for the last 4 years. He has already sold arms worth lacs of rupees to Venkat Reddy in the last 4 years after purchasing them illegally in Kerala and Karnataka.

The police have seized things worth Rs 8.70 lac along with Rs 3.70 in cash from the accused. A case has been registered in the Bunder police station in this regard. Bunder police inspector Vinay Gaonkar has been carrying out the enquiry in the said case. Information about their arrest has also been sent to Andhra Pradesh police.
Posted by Fact at 8:21 AM