So who is Group Captain R K Prasad ?

Hope you all might have read this article......26/11 to Maoists: A soldier’s war , now some more details about Group Captain R K Prasad

"It was a rude awakening for me to realize that the Jharkhand police in totality was more scared of these miscreants than the ordinary citizen on the streets or in the village.... The hard question that kept coming to my mind was whether this was the country, and if this was the society and if these were the people - a section of which could bear so heavily upon us, so as to literally bring us on the roads - that three generations of ours had pledged even our lives for," --- Group Captain R K Prasad 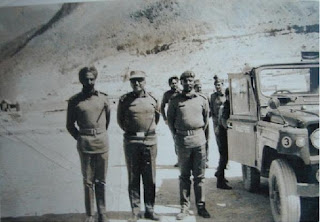 BN Prasad, 80, who handed over the Rs 10-lakh ransom to the kidnappers to get his son freed

Shyam Kishore, who was kidnapped

At the outset, I must express my deepest sense of gratitude to you for taking bold and firm steps towards eradicating the Naxal menace plaguing various states. It also gives me a sense of security and reassurance to be able to address my problems to you through the opportunity granted through your ministry's website.

I am a pilot with the Indian Air Force with 28 years of meritorious service, with most part as a fighter pilot and subsequently as a helicopter pilot. I am presently employed as a Joint Director in Directorate of Operations Room at the Air Headquarters, Ministry of Defence, New Delhi.

It may not be out of context to mention here that my father, Honorary Capt BN Prasad, is a proud ex-serviceman who retired in 1975 after 30 years of military service as an infantry man. My younger brother, Sri SK Prasad, with whom my parents live as both are more than 80 years old, served for 12 years in the Indian Army before he took premature retirement in 1990 due to the poor health of my parents. My son, Flying Officer Ashwin Prasad, is also a fighter pilot with the IAF, commissioned in June 2008. And I wish to mention here that my daughter, Ms Neha Prasad is no less motivated and is all set to join the IAF and go for training at the Air Force Academy in January 2010.

Sir, such pride and honour in military service and uniform, to commit three generations to take the pledge to make even the Supreme Sacrifice, when called upon for the sake of the nation, could not have been possible without faith and absolute trust that honourable and great leaders like you are at the helm of affairs, and are examples to ordinary citizens like us, in leading the nation ahead in it's march to glory.

However, not all is as well as it sounds.