How Large Is The World's Intelligence Industry? Now We Know... (Thesis Month)

How Large Is The World's Intelligence Industry? Now We Know... (Thesis Month) 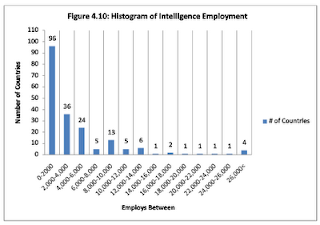 One of the questions that has really bothered me over the years concerns the size of the national security intelligence "industry" worldwide. When you add it all up, how much money do the states of the world spend on intelligence and how many people are involved in government intelligence work?

These questions are important. There is a popular impression in much of the world that "intelligence is everywhere", that it is both all powerful and omnipresent. Creating or encouraging this impression in dictatorial countries might even be part of the system of repression. Knowing the answers to these questions could help reformers more accurately assess their risks.

Even in democratic countries, however, understanding the resource limits of the national security intelligence apparatus at the broadest possible levels, where the need for citizens to know where their money is being spent can be appropriately balanced with the legitimate operational concerns of the working intelligence professional, seems to make sense.

From a more provincial standpoint, it also seems important for educational institutions to have some sort of a feel for the need for trained professionals in intelligence work if the university model is ever going to supplant government training as the primary way into the intelligence communities of the world.

The answer to this question, however, is obviously difficult to uncover. Most countries do not want to discuss how much they spend on intel each year. Oftentimes, it is even difficult to figure out which organizations within a country are actively engaged in intelligence work.

It is with great pleasure, then, that I announce the final results:

The national security intelligence industry accounts for about $106 billion dollars a year and employs about a million people worldwide.

These are the numbers generated by Chris Hippner in his interesting and exhaustive thesis titled, A Study Into The Size Of The World's Intelligence Industry.

While Chris has done a good (extraordinary, really) job of collecting as many facts and figures as he could regarding the intel budgets of every country on the planet, he had to rely on estimates for many of them.

These estimates are based on GDP and on the spending patterns of countries where the data is available, a method which Chris readily admits is fraught with some difficulty (I note with some interest, though, that Chris has posted a note to his online thesisencouraging people to send him more accurate figures. It will be interesting to see how many people take him up on the offer...).

I am also sure that Chris has missed some organizations. It is virtually certain that there are organizations out there which are well known to people living in a particular country to be wholly controlled by that country's intelligence apparatus for which Chris has not accounted. Such errors are essentially unavoidable given the global scope of his thesis work.

Likewise, Chris simply did not have time to examine either the growing presence of intelligence units in law enforcement or business (My own guess is that this would approximately double the total value of the industry).

All that said, this thesis does exactly what needed to be done -- give us all a starting point for further research and refinements.

A full copy of the thesis is located below or you can go to Chris's site on Scribd.com for other viewing and download options
Posted by Fact at 5:25 AM