Politics in Nepal is often a lot more about India than about Nepal itself.

Many Nepalese political parties sustain themselves on a steady diet of scaremongering about the neighbor to the East, West and South.

The geography of a landlocked country dependent on its big neighbor for almost all of its imports and most of its exports has also shaped the national psyche. After all, as John Whelpton, author of a history of Nepal, puts it, to many in Nepal their being a Nepali comes directly from strong sense of not being an Indian.

So as Nepal stands on the brink of a constitutional crisis because of the political parties’ failure to meet tonight’s deadline to write a new constitution, what has India been doing?

Not too much. And that’s the news.

In the past, every time Nepal faced a crisis, India stepped in one way or the other. And, to be sure, India’s current ambassador to Nepal, Rakesh Sood, was in news in Kathmandu Thursday for his meeting with Prime Minister Madhav Kumar Nepal.

In an interview with India Real Time, Mr. Sood said “ It is not for India or any other country to play a role” in ending the current political deadlock over extending the life of the Constituent Assembly in Nepal. Though,he added,“ Anything that will happen has to be driven by consensus among the parties so that it enjoys the political legitimacy.” 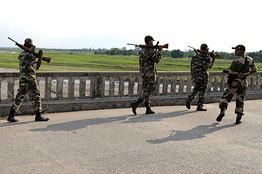 AFP/Getty Images
An Indian patrol along the Indo-Nepal border.

But Nepal observers say India’s role in Nepal has changed since the popular uprising of April 2006. Back then, India sent high-profile Congress party member Karan Singh as its special envoy to talk to then-King Gyanendra Shah as protestors stormed into the streets of Kathmandu in a bid to bring down the monarchy.

The king succumbed to the protestors following Mr. Singh’s visit (Kathmandu still ponders over the mystery of what Mr. Singh told Mr. Shah to convince him to give power back to the political parties), paving the way for the revival of parliament and the elected government the king himself had dissolved.

Since then, India has abandoned its long-held “twin-pillar” theory of supporting the co-existence of a constitutional monarchy and multiparty democracy. As India’s former ambassador to Nepal, Deb Mukharji, told the Wall Street Journal in May 2008, India’s only pillar is now “the will of the people of Nepal.”

On Friday, as he observed the developments in Nepal from his residence in New Delhi, Mr. Mukharji said reduced Indian interventions in Nepal were because “it’s in India’s interest to go by what people in Nepal decide.”

K.V. Rajan, another former Indian ambassador to Nepal, told India Real Time: “India has been watching latest situations in Nepal with concern,” but is refraining from “playing an augmented role.”

The political parties in Nepal, especially the Maoists, have entrenched suspicions against India and its role in their country. One popular piece of rhetoric from Maoist Chairman Pushpa Kamal Dahal is that the ruling parties in Nepal right now are the “puppets of India.”

He raised eyebrows in Kathmandu for an audacious speech to a gathering of his supporters in December in which he said his party would no longer hold talks with the ruling parties, but would now talk directly to their “masters” — a reference to the political establishment in New Delhi.

Even if India remains at a distance diplomatically, there is a need for trust as the basis of the relationship, says Mr. Mukharji. “Geography has put us together, our past history has put us together. Nepal and India cannot be suspicious of each other,” he says.

Rajahmundry, May 26: The state director general of police, Mr R.R. Girish Kumar, stated that roads and communication network would be strengthened in the Maoist infested in the state in a bid to keep check on the Maoists.
Speaking to newsmen here on Wednesday, the DGP said that they were expecting sanction of huge funds from the Centre for development of basic amenities and infrastructure like roads and communication network in Naxal-affected areas in the state and added that the Centre had already sanctioned Rs 100 crore for construction of roads and setting up communication networks and taking up developmental works in Khammam district.
He said that they will initiate similar works at Andhra-Orissa border, Srikakulam and Vizianagarm districts and added that they appealed the Centre to allocate more funds for initiating developmental works in the Maoist-affected areas in East Godavari, Visakhapatnam Rural, Warangal, Karimnagar and Adilabad districts.
The DGP said that lack of proper road network and communication facilities in interiors of Chhattisgarh was resulting in Maoists involving in a spree of violence. He said that they were initiating measures to strengthen the police force by providing training. He said of the total amount of Rs 400 crore requested, the Centre had sanctioned Rs 100 crore for the purpose.
Mr Girish Kumar assured steps to control the illegal trafficking of the girls for flesh trade and said that they were also making efforts to provide relief rehabilitation to the rescued girls.
He said that instructions would be issued for closure of lodges and hotels for a period of one year in case they allow prostitution in their premises.
Proposals for setting up new marine police stations were also under consideration, he added.
The DGP said that repairs would be carried out to the police quarters in dilapidated condition by availing Hudco loans worth Rs 35 crore in the state and added that a proposal for enhancing the wages for the home guards to Rs 175 per day each was sent to the state government and assured efforts to provide welfare to them.

Posted by Divya Kumar Soti at 10:59 AM No comments:

Burdwan (WB), May 27 (PTI) Four posters from suspected Maoists threatening local SFI leader and a college professor were today found from the Burdwan University, sparking off tension in the campus, police said.

The posters were spotted on the walls of canteens of humanities and law department.

The posters said SFI's district secretary Arindam Chakraborty and professor Jayanto Saha's fate will be decided in the people's court.

Police, however, brushed off the incident by saying the ultras are not active in the area and the incident seems to be a handiwork of the local Trinamool Congress leaders.

SFI leader Chakraborty said, "We are not giving any importance to this. Trinamool Congress leaders have done this to spread fear among the students".
Posted by Divya Kumar Soti at 10:52 AM No comments: